Make sure to remove old versions of Galacticraft from your /mods folder, if updating from the beta versions!

(If playing Galacticraft with CustomNPCs or More Player Models, please make sure to use the latest (May 2017) versions of those mods)

After a lot of work and some hiccups in the development process, the beta testing phase of Galacticraft 4 is here.

During the BETA phase, I will ask that these builds only be used for those looking to help polish and improve the Galacticraft 4 release. These downloads are subject to the Galacticraft license, which can be viewed here. It's not wise to create modpacks or extensive maps based on these builds, as things are likely to be changed before we reach the release phase.


Please report issues on the Galacticraft issue tracker here, adding the minecraft version number to the title of the issue to help distinguish these from 1.7.10 issues. Include detailed information about the issue, as per usual, including crash logs and any information that can be used to re-create the problem.

Updating from worlds made using the older BETA of Galacticraft 4: when you update, first time you start the world, Forge will report 6 "Missing blocks / items" - for example breatheableAir - and ask if you want to continue. It's OK to continue! There are no missing blocks! Forge has detected 6 missing items because there are 6 things which now don't have any item (three types of air and three types of dummy block).

Updating from older worlds made using Galacticraft 3 / Minecraft 1.7.10 is not supported. A few people have been able to make this work. If you want to try it, proceed cautiously and keep a backup of your 1.7.10 world. Like other Forge mods updating to 1.8+, it's not likely to be a smooth update process. Some tips:
- It may depend on what other mods you're also bringing with you: the smaller the modlist the better
- You should load and save your world in 1.7.10 with the reduced modlist before switching Minecraft versions.
- Try updating first from 1.7.10 to 1.8.9
- Galacticraft items in chests or inventories should update correctly, if they don't then the update probably won't work at all for your world
- Galacticraft blocks (machines) placed in the world may not be correct. At minimum it's likely that some block rotations will have changed, there may also be contents loss or other issues.
- It would be a good idea to break and re-place all Galacticraft blocks in your base, and the same for machines from other mods.
- Some blocks have changed, for example oxygen pipe is now fluid pipe.
- Moon, Mars and Asteroids dimensions should be deleted and fully re-generated to have their correct dungeons in Galacticraft 4.
Last edited by a moderator: Jun 17, 2017
Reactions: saharmel984, kenijey, El_Saam and 10 others

Latest build 69 is now available. This has Sponge compatibility in Minecraft 1.10.2 and 1.11.2, for people who want to run SpongePowered servers.

Click the links then look near the top of the page for "Last Successful Artifacts", you will see there the three files to download (GalacticraftCore, Galacticraft-Planets, MicdoodleCore).
Last edited: May 6, 2017
Reactions: kenijey, genius64, MJRLegends and 1 other person

This adds JEI support for all or most of our recipes.
Smoother rocket flight, and better landings.
Many bugfixes as discussed in the Issues list (including some old bugs, like the moon Lander flame not going out after it lands)
Better Titanium tools.
Better Vacuum Glass textures in your inventory, you should now be able to see them (and yes I know there are two types which look the same...)
Sealable ME Cable in 1.10.2, compatible with alpha / latest versions of AppEng2.
Rotating Advanced Solar Panels on space stations.
Reactions: genius64 and El_Saam

This has a lot of bugfixes thanks to our awesome beta testers.
You might notice smoother rocket transfers between dimensions.

The Fuel Loader now has configurable sides (rotate by sneak-wrenching it) similar to the Electric Furnace / Arc Furnace and Energy Storage Module.
Magnetic Crafting Table has a shift-description added. You really should try this out, it's an awesome addition to the game: really simple to use and it 'just works'. Better than the Tinker's Construct or IC2 equivalents ... IMHO ...

All these Galacticraft 4 versions will now check which Forge version is running, they should be fine with the "Recommended" or the "Latest". The "missing an MCVersion annotation" message at the top of the log files is gone, so this should maybe reduce the number of false error reports people post! (We could not add an MCVersion annotation in Galacticraft 3 - and we still can't! - because Galacticraft 3 is compatible with two different Minecraft versions at the same time, and the MCVersion system literally can't understand that.)

This has a new feature block: Lighting Panels, have fun with it.

Also improvements to Vacuum Glass, that should now be working neatly in all configurations. Let us know if you find a situation where it looks wrong ... a screenshot will help, please enable F3 in your screenshots so that we can see the orientation of the glass.

In Minecraft 1.11.2, Canisters and Buckets are now working properly and should be compatible with all other (proper!) mods.
Reactions: kenijey and El_Saam

A few bugfixes, updated Arc Lamp behaviour. Wider compatibility with other mods fluid items in 1.10.2 only (the compatibility already existed in 1.11.)
Reactions: kenijey and El_Saam 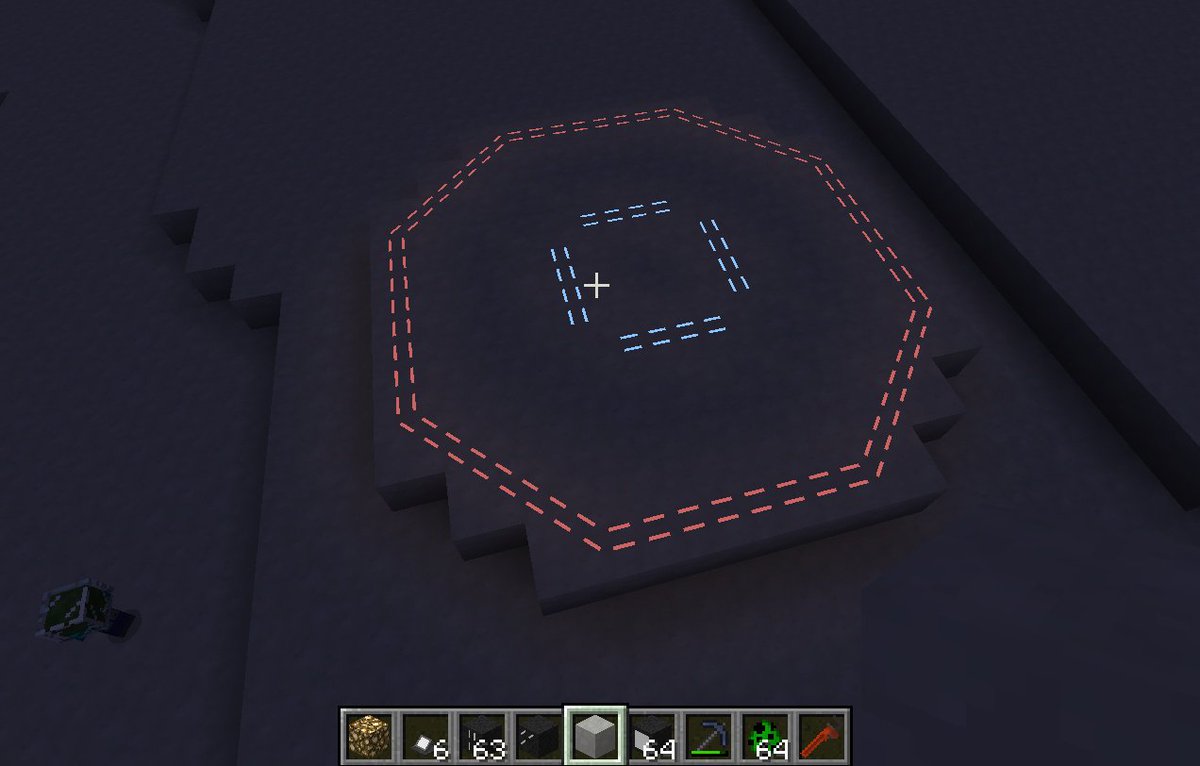 * Galacticraft mobs (Evolved Zombies, etc) difficulty level now reflects the game difficulty setting (Easy / Normal / Hard) instead of the Galacticraft "hard mode" config.
* As suggested by SockDotGif (and maybe by others before?), Alien Villagers will now trade Moon Buggy / Tier 2 Rocket Schematics for the other one + some sapphires
Reactions: vos, kenijey, Aragrohl and 2 others

* More bugfixes: NASA workbench is working properly in 1.11, Galacticraft generators now output power to RF mod wiring connections (apparently, they didn't before in any Galacticraft version ... a bug which has been hiding in the mod for two years ...)
* Improved Sponge compatibility
* Even more reliable dimension transfers, nobody should experience issues now (if you do, I want to hear about it!)
* Our existing compatibility features with other mods, big and small, should now be working in 1.11 if they weren't before
* Slimeling GUI has a tooltip on the favourite food (it's the little things...)
* Galacticraft Inventory Tab is now correct with potions when JEI is present
* Rockets and other 2-hand items should now be correctly held even if you had another item in your off-hand inventory slot (if that other item was a another rocket, you will either drop it or it will be auto-moved to an empty slot in your player inventory, if possible - please check this works how you might expect)
Last edited: May 3, 2017
Reactions: vos, Ezer'Arch and El_Saam

That's it for this time! Probably no more updates for a few days now.
Reactions: MJRLegends, genius64, El_Saam and 1 other person

This is pretty much all bugfixes and compatibility fixes with other mods. But I do recommend that everyone update to Build 84, it should be more stable all round.

Main changes:
* Cryogenic Chamber now sets time to morning independently on each different planet. So on a multiplayer server, if players sleep on the Overworld, players on the Moon won't see the sun suddenly jump to a different position in the sky. (This update will also be included in next 1.7.10 build.) Also, if there's only one player on a planet, that player can sleep in a Cryogenic Chamber there even though other players on the Overworld are awake.
* Cryogenic Chamber animations added polish
* Fallen Meteors mine faster if you use high level Galacticraft tools (Heavy Duty, Desh or Titanium pickaxes), 75% chance of drop 2 raw meteoric iron
Reactions: El_Saam

We have a beautiful updated download site at: https://micdoodle8.com/mods/galacticraft/downloads

Galacticraft 1 for Minecraft 1.5.2 is only available in the final version, sorry no older versions for all you Voltz and Tekkit-Lite fans ... actually I miss those days!
Last edited: May 12, 2017
Reactions: El_Saam, genius64, kenijey and 2 others

If you've been playing earlier versions of the beta, you might want to regenerate Asteroids and Venus (delete DIM-30 and DIM-31) to have the latest Abandoned Base generation and Crashed Probes on Venus. Or leave it till next build ... more treasure items will probably be added soon.
Reactions: El_Saam, genius64 and Ezer'Arch

There have been more updates since then, in more recent builds we now have Evolved Endermen in the game, and Oxygen Sealer Leak Tracing (using Sensor Glasses). Also a lot of bugfixes, especially for people playing on servers.

I will not be announcing each new version, please check the official downloads site (link in first post) for the latest.
Reactions: El_Saam